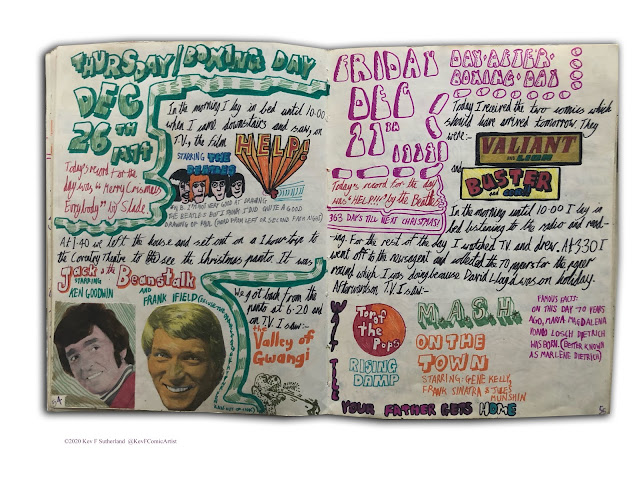 As I post this at the end of 2020, it serves as a cruel reminder of what we're missing this year. Namely the Christmas panto. In 1974 we were treated to Jack And The Beanstalk starring comedian Ken Goodwin and yodelling Australian Frank Ifield. What I thought of it goes unrecorded here, my only note being an apology that I'd had to use an orange pen to colour his face in. A career as a theatre reviewer was definitely lower on my list than a career as a designer who colours things badly then finds excuses for it.

Some legendary TV on at the time, including On The Town (which we watched only a couple of weeks ago), MASH (which the Socks did a song about only last month) and Wait Till Your Father Gets Home (about which I was reminiscing very recently). And this must, I assume, be the first time I'd seen Help! It was definitely the first time, and possibly the last, I tried drawing The Beatles. 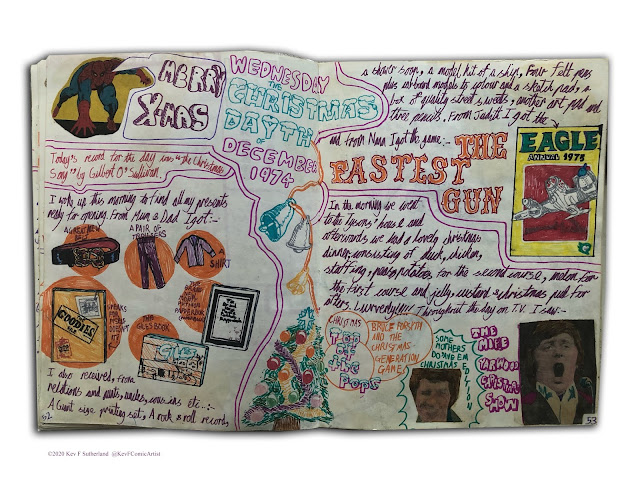 The first Christmas captured by my Picture Diary (which began life towards the end of term in June 1974) concentrates on illustrating the goodies I've received. Which include the legendary Goodies Files, a book that crops up regularly in second hand bookshops at pocket money prices. Does no-one realise the sheer quality of that book? With its cutout pages, overlaps and folds, and of course top notch comedy writing and pictures it is rivalled only by another pressie I got that year, The Brand New Monty Python Papperbok.

I had in fact been bought the Papperbox the previous Christmas (well, the hardback Bok version) by Mum who then took a lot through it and decided I was too young for it. She wasn't wrong. There are gags in this book that I wasn't going to understand for a few years yet.

That trouser belt was one I treasured and wore for the next five years, into my student days. It may still exist somewhere, it was a solid piece of brass was that buckle. That Giles book may well have been the foundation stone of my collection, which now included all but half a dozen very early books. To be honest, some could use replacing with less tatty versions. I wonder if I'll remember that in time for next year's Christmas presents?

The Scottish Falsetto Sock Puppet Theatre will be touring near you sometime. Catch up with them on Facebook for the latest. 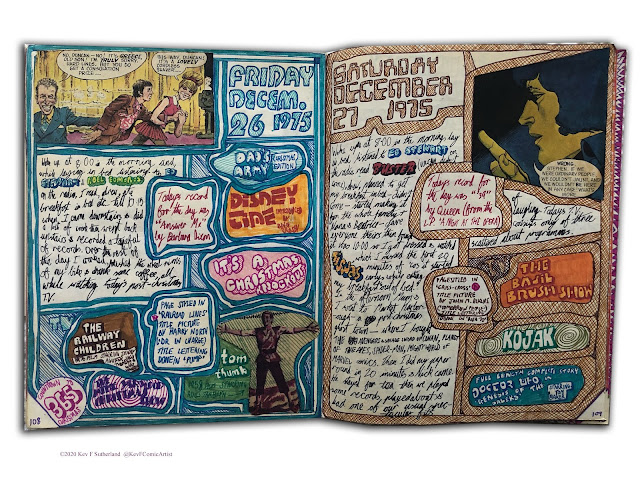 Market Harborough was, according to my diary on December 27th 1975, a "post-Christmas ghost town". Boy did I have no idea what the whole country would look like 45 years later (I'm writing this at the end of 2020, where ghost towns have been a familiar sight for a few months now).

The rest of post-Christmas 1975 looks much like it does today. Somewhere they'll be showing The Railway Children, Tom Thumb, and Dad's Army, and folks will be reminiscing about the time they saw Genesis Of The Daleks. In my case, it was at the bottom of page right. 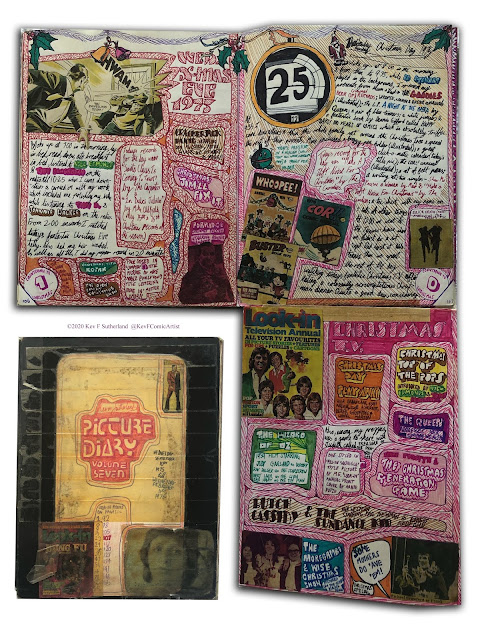 A fold out spread for Christmas Day 1975, no less. How else to show off all those presents? Annuals galore, and what a lot of them. Not only the ones I had pictures of, but another three not shown, plus The Goodies Book Of Records, and the fantastic Happy Days book by Denis Gifford, that I still consult to this day.

The orange ball depicted on Dec 25 is my desk calendar, something I'd forgotten till now. You'd push a button and the date would flip over. The things we did back in the days before smart phones.

Quite the classic time for TV and pop music, with shows like the Porridge, Morecambe & Wise, and Some Mothers Do Ave Em Christmas Specials that still get shown on TV to this day, and brand new singles including my Records For The Day In Dulce Jubilo and Make A Daft Noise For Christmas. 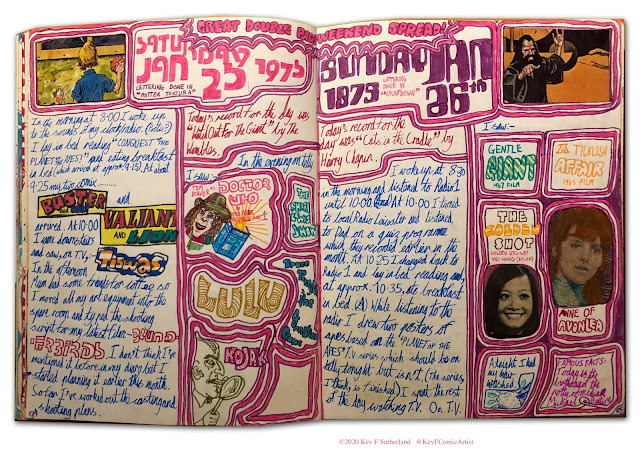 Who remembered my Dad had appeared in a quiz show on Radio Leicester? Not I. Though I do remember he was on some sort of board or other, as a result of which we used to get a free Radio Times every week.

And as if that weren't starry enough, check out my description of the work on my forthcoming feature film: "..typed the shooting script for my latest film, Blunderbirds. ...I started planning it earlier this month. So far I've worked out the casting and shooting plans." The film did get made, and I have it copied to VHS somewhere. Sadly it's not made it into Youtube yet. But someday I'm sure we'll all get to see it.

In my Records For The Day is Look Out For The Giant by The Wombles, which I can safely say I have not heard once in the intervening 45 years. 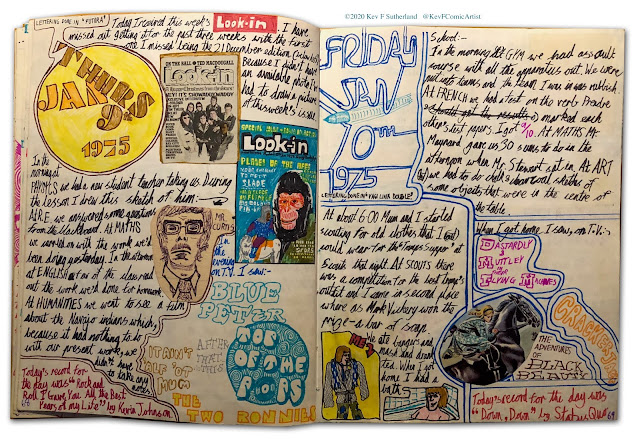 An interesting little portrait here, of a "student teacher" called Mr Curtis, of which I have no memory. If he's out there anywhere, this is for him. In these early days of my diary (which I had started the previous summer) I was endeavouring to illustrate parts of my life, a tradition which soon evaporated. But here it continues, with me dressed as a tramp for a Tramps Supper, whatever one of those might be (at which I won a bar of soap, do people still run events like that these days?). I've also drawn myself in the bath. There are a few of these bath drawings in my diary, a very perplexing sight.

My Records For The Day run the gamut from maudlin to classic. Kevin Johnson's Rock And Roll I Gave You All The Best Years Of My Life is an odd one for me to relate to at the age of 13. Bizarre to see that the guy is singing about his musical career being over when, by his description, he's only been at it for about a decade ("bought all The Beatles records, sounded just like Paul"). That makes him younger than most of the acts on Jools Holland this year. 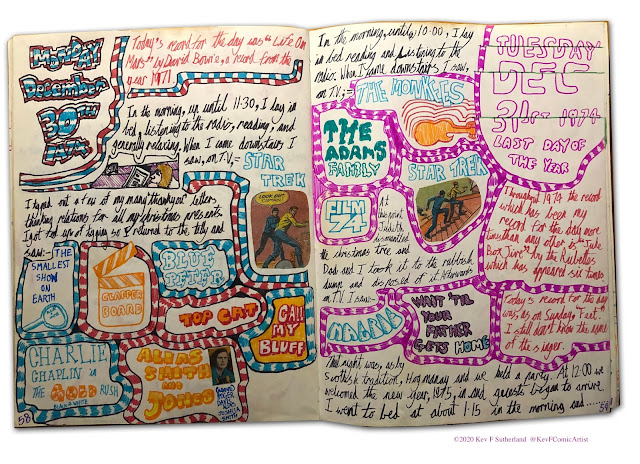 This is the first of my diaries to record the Sutherland family's legendary Hogmanay party. I say record, obviously being my diary it makes no mention of anything or anybody and devotes most of its space to TV shows and pop records. But we learn that the party started at midnight and I, aged 13, lasted till 1.15 in the morning. Lightweight.

The Star Trek pictures, which this chapter of my diary is peppered with, were cut from my weekly Valiant and TV21 comics, rendering them near worthless when I finally put them on eBay 45 years later.

My Records For The Day include something called Feet which, elsewhere in the diary, I discover was by someone called Mark Stephens. Researching this post I've heard for the first time since. It's not half bad.

Kev F Sutherland is a comic writer and artist whose work appears in The Beano, The Dandy, Doctor Who, Marvel comics and many more. On stage, online and on TV he is the man behind the world-famous Scottish Falsetto Sock Puppet Theatre. He presents Comic Art Masterclasses in schools, libraries and art centres. He is the creator and producer of The Sitcom Trials. Kev also works as a caricaturist, author for TV and radio, Comic Festival producer, comics historian and pundit, stand-up comedian and public speaker.